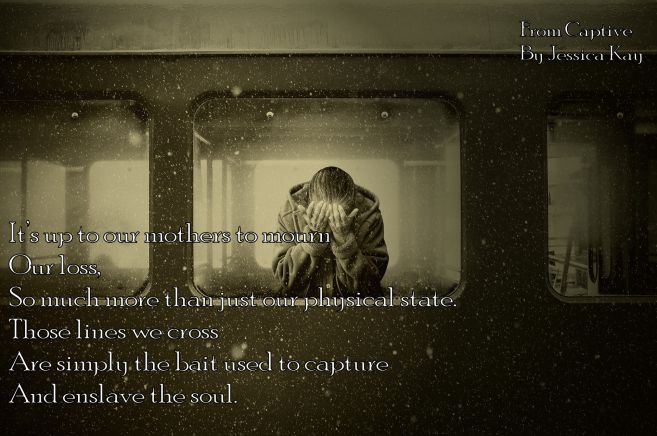 I cry for him, he does not know,

Though, while my tears flow, I worry

And curse myself for not being fit enough

At teaching him those things he should know

Better than to do

When away from home,

How to stay true to himself

When all others try

to encourage him to do or die

Why is it that others help take

Away that innocence with which we’re born,

And throw us to the wolves?

And it’s up to our mothers to mourn

So much more than just our physical state.

Those lines we cross

Are simply the bait used to capture

And enslave the soul.

*Youngest kid is having a couple of very bad weeks at school and I am reminded of some things I did at the same age which resulted in my mom and stepdad using a very extreme form of punishment (but very inventive at the time) to correct my behavior. They took me to the police station near our home and left me sitting in the car with my mom while she discussed why what I did was wrong. My stepdad went inside the building and when he came out he “confirmed” that they did take 7 year-olds to kids’ jail. What did I do that required such an extreme measure? I took some Kool-Aid and candy from the grocery store without paying. Mind you, my mom caught me before we even got out of the store and I had to apologize to both the store manager, whom my mom called over, and to the register clerk. Let’s just say I learned my lesson. But between Tornado’s behavior lately and remembering my own at his age it got me to thinking about how many kids don’t have someone who cares enough for them to help them. And so, their mother’s mourn their loss, both the innocence and the soul that had so much potential.

The evidence that would betray me,

For it will bear witness to the truth

Of what’s been done.

And even though, perhaps,

These fact-bearers would also show the cracks

And scars I carry

hidden away in darkness,

and the things I cannot say,

and then must needs be dealt with.

And I am not ready.

So I fight back the attestants,

Those warm, wet, and salty testifiers,

That would willingly tell my story

The moment they fell from my eyes.

*Day 4’s NaPoWroMo prompt is to write about sadness in a simple way. Well, I wrote about fighting sadness and losing that battle. And it’s not really in a simple way I suppose but then sadness is rarely simple. 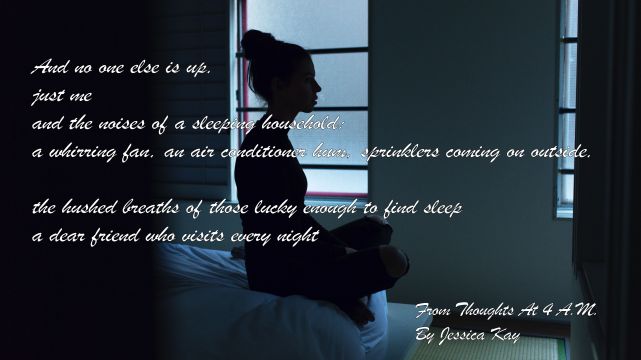 The dog is having a nightmare and whimpers in her sleep

where he feels safe and secure and warm.

so I’ll pet her because for whatever reason,

I should be awake to offer them attention.

school counselor by 8 a.m. so it’s up and to the computer and finish that

and really, I should fill out the other form but what’s the use when I won’t be

approved for the assistance anyway,

and besides, it’s not so much to really need help

with paying after all, if only they could wait until mid-month.

get away with pushing them off until the next payday.

There’s the constant worrying over how my newly graduated son

and needs so many more skills that he refuses to learn.

…except even I’m struggling so how can I think I could possibly teach him?

Then there’s the growing tension between Him and I,

a constant bruise that never goes away. I struggle to not

while He tries to force me to be what He thinks He wants me to be,

and I can’t be that, and so the tension keeps mounting and I don’t know

and accusing and saying things that aren’t true.

He’s trying to get a reaction,

-because it’s not me who can do that, it’s Him and he struggles with this concept-

and when He does it makes Him angry and retaliative,

and it’s all just too much.

when all my life I saw how hard it was in the example my parents set before me.

And no one else is up,

and the noises of a sleeping household:

a whirring fan, an air conditioner hum, sprinklers coming on outside,

the hushed breaths of those lucky enough to find sleep

a dear friend who visits every night

while I sit here typing away trying to shut the madness of worry out,

and hoping I can strain enough of these teeming concerns through

and let my heavy eyelids fall

and shut out the world.

*I’m participating in National Poetry Writing Month this year and this is my offering for Day 3’s prompt, which is to write a story or action that takes place over time. I wrote about the thoughts that go through my head during a time when I can’t sleep.

Walk with me through Winter’s woods,

And roses bloom in profusion.

It’s only when the trees disrobe

And the roses undress,

Can cover them in sparkling jewels.

And if not for the biting cold

We would not cling together

Or look to another for comfort

When the darkness sets in. 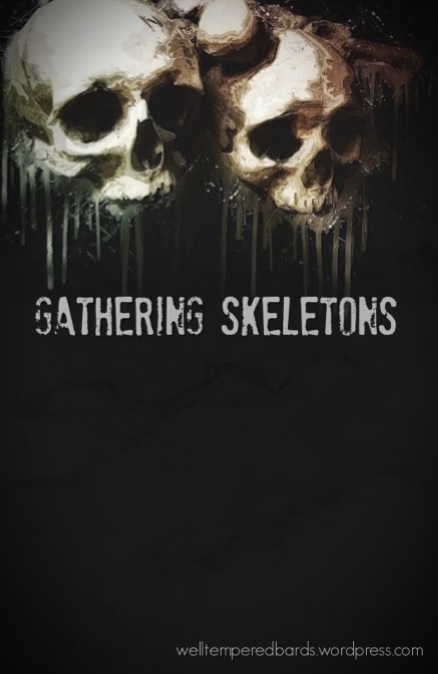 I am gathering skeletons

Lurking in the corners

Of my life – rattling,

If I Were You

If I were you

If you were me

The one I’d crave

The one to save

World in my heart

Exodus of the end

* Day 13: to express to someone your point of view using a Blitz poem, not my favorite form. I decided to put more thought and interest in it by making it rhyme as much as I could and to try and make it a little more challenging.

Silence my words with your

Knife-stabbed heart through the back,

I turned and you were gone.

Evidence along the floor.

Cut me down to your level,

Shove in my throat.

Ignore the damage you leave in your wake;

Hurricane hiding in an empty face.

And arrayed on a silver platter.

Huddled on the cold, hard floor.

You turn your back and go.

*Day 12 of the challenge brings us to feeling tortured. When things don’t go well in a relationship we tend to torture ourselves with thoughts of what we could have done differently. We go over and over the things we said, the actions we took, and we question if we did the right thing. For some the torture happens before things end. We walk on eggshells trying to make decisions that won’t make things worse. Putting out fires before they turn into an inferno becomes the order of the day; being constantly on guard is simply the new normal. In my poem I write about the emotional torment in a dysfunctional relationship.

We mark the hours knowing

The sell-by date is coming.

We ignore the imperfections.

So what’s the use in complaining?

The future is already accepted;

We mark the hours knowing.

Little things we let slip through,

Those hairline fractures that mar the surface say

The sell-by date is coming.

Still we try to hold on to keep from breaking;

We glue the pieces back together while

We ignore the imperfections.

* Day 11-Falling Through the Cracks: day 11 deals with imperfections, cracks, letting your guard down, and the resulting fallout. What happens then? I wrote about seeing the cracks coming and holding on in spite of the omniscience. The suggested form is a Cascade.

One small glance in each direction,

Suddenly, we have become obsessed

Having drunk ambrosia from Love’s own cup

And feasted with Joy: now we offer up

That which belongs to Delight and Ecstasy.

We dance together in pleasure, breathlessly,

Soaring among the clouds -with rapture we are crowned-

Until once again our feet touch upon the ground.

* OctPoWriMo Day 10 prompt: Dancing On Air; suggested form: Con-Verse. Still catching up. Been caring for sick child who is now well and almost 100% again, and have now become ill myself. Will try to write and post when I can.

The warm bath after a long, hard day,

The warmth that chases the cold away.

The cool wind that blows ‘midst the summer heat,

The cosy blanket we snuggle up in,

The jolt that sends us into a tailspin.

The light that shines and shows the rocks ahead,

The reason for spending the rainy day in bed.

The reason to hold someone close,

The reason your heart to expose.

The reason for my staying near

Is because love brought you and made you dear.

The Well Tempered Bards
Create a free website or blog at WordPress.com.